What is a NOUN? According to Concise Oxford English Dictionary, a NOUN is a word used to identify any of class of people, places, or things (common noun)*, or to name a particular one of these (proper noun)**.
* Common nouns such as dog, chair, road, etc.
** Proper nouns such as John, Marie, Apple Inc., STBA Yapari-ABA Bandung, Indonesia, etc.

THE FUNCTIONS OF NOUNS 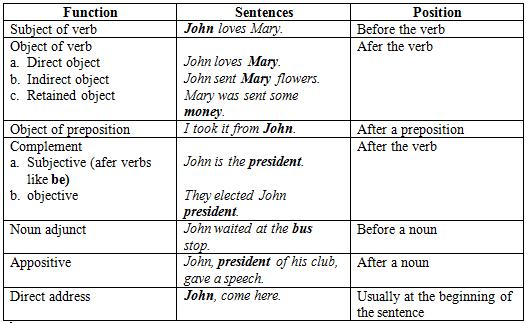 To know more about NOUNS, watch this video.

And to know what NOUNS do, watch this.

COUNTABLE nouns have two forms: SINGULAR and PLURAL. To make a singular noun plural, you don’t just simply add -s ending. There are some rules and exceptions in making singular nouns plural. Read here for the explanation.

So, I hope the explanation about the NOUNS, one of the parts of speech, will help you understand more about them. Please comment if you have anything to say. Thank you and cheerio!